What Happened to the CPG Regarding Salmonella in Animal Food? 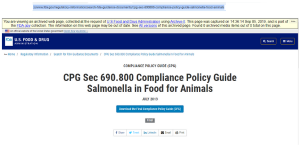 Regardless of whether they manufacture fresh food, such as Next Generation Pet Food Manufacturer Association members do, or conventional pet food, such as represented by the remainder of the industry, all pet food manufacturers know that the FDA has a zero tolerance policy on Salmonella and Listeria in food, specifically pet food.

The compliance policies are well known.

Is it possible that the FDA sees the writing on the wall and realizes that their zero tolerance stance is untenable?

Before you throw a party thinking that maybe we won, the compliance policy against Salmonella in food for animals has “simply“ been moved to the archive. It remains present at this link.

Doesn’t it seem strange that the CPG regarding Salmonella written in July 2013 has been archived where the CPG against Listeria written in February 2008 has not?

Regardless, no announcement has been made. Much is left to the reader’s imagination. Did this CPG truly move on September 5, 2019? Only the regulators know. But it does suggest changes are afoot.