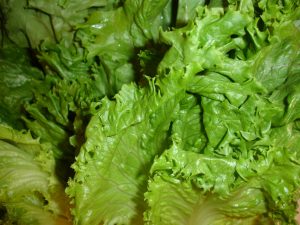 Personally, I eat a lot of romaine lettuce and Caesar salad.

I’m one of the sensitive people that if the lettuce isn’t washed about 8 times I’ll get an intestinal “thing” after eating some of the lettuce. Consequently, I’ve noticed something throughout the lettuce recalls and health warnings.

Here’s what I’ve noticed: organic lettuce doesn’t need to be washed anywhere near as much as the conventional lettuce to render it clear of “organisms.” (Note: organic lettuce has NOT been implicated in the recalls.)

That got me to thinking – why?

It goes back to how the lettuce was raised – organic lettuce is grown under more natural conditions – like my great grandma used to do. It’s the conventional lettuce, grown under less natural conditions with chemicals that, ironically, are supposed to prevent growth of organisms, that has problems with bacteria and causing illness in humans (again, follow the recall notices). Most likely, this observation applies to all food – it will have less “contamination“ the more it is raised like it was before conventional systems changed things.

Even pet food: if it was reared under more natural conditions, especially organic conditions, is going to have less “organisms.” It is also very likely these organisms will be in better balance as there will be other agents present in the food to control the organisms – for example, enzymes.

Sadly, the way our system is currently set up, food is tested for “contaminants” at the final product stage – regardless of whether it is pet food or people food (or people food destined for pet food). This puts the penalty on the end manufacturer who is working with an already compromised product.

Did I really say that out loud? Follow the logic…

The law is written such that regulators have authority to trace the source of so-called pathogens all the way back to their origin. Recently, a congress person introduced a bill to grant more authority to food inspection agencies – the agencies don’t need it – they already have the authority granted in the Food Drug and Cosmetic Act, the regulators just don’t use it.

Think of the labor this would take. It’s astounding! For example, unbleached flour is found to have bacteria. The manufacturer who brings it to market is currently the one who has the recall and is “punished.” Imagine if, instead, the regulators determined who grew that wheat and which field it came from. Imagine if regulators determined the problem was really the wheat was grown on a field that had previously grown gmo corn and the field was laden with chemicals that lead to the bacterial contamination of the wheat? Then who would be held responsible? Not the farmer, because he was growing what convention told him would yield the best profit.

The responsibility actually goes back to the regulatory agency that determined the gmo system was “safe!”

My intention is not to harp on gmo’s here, so let’s use a pet food example. In the last two years the only pet food recalls made for the presence of bacteria in the food have been the raw pet food category. (Most of this relates to what is being tested, but that’s a topic for another post.) What we’re discussing is where did the bacteria come from?

If we’re talking raw, USDA sourced and passed meat, that meat is delivered, alive, to the USDA plant with bacteria already in it – there are federal court cases that say so. In truth, logic (as well as the law and public demand) suggests inspectors and regulators should go back to that source of bacterial contamination so it doesn’t happen again. Let’s penalize the initiating cause, not the end result.

Because what everyone wants is no more food-borne illness.

But the source of most of the bacteria found in raw and fresh foods goes way back before the ingredients were ever inspected and passed by government inspectors. In the case of meat products, the bacteria comes from the actual feed the animals eat. Ironically, the same agencies that inspect the final raw meat product are responsible for inspecting the contaminated feed which is fed to the livestock.

Looking at inspection records, livestock feed is almost never evaluated for presence of bacteria. Livestock feed is most commonly tested for plant toxins that affect palatability to the livestock (for example, aflatoxins, because they will decrease production – AKA profits).

If the livestock feed were tested and failed (recalled) for presence of bacteria (bacteria which are already documented to be there), there would be a lot less bacteria in the final meat product being delivered to the inspection and packing plant. Thus, the end product would have less bacteria.

In truth, the way to stop all these recalls is to stop them at the source. Regardless of what kind of food we’re talking about – pet or people food.

Our inspection system needs to change. The technology is there. Sadly, the wheels have been greased by big business to keep the situation as “normal,” even though the law allows for proper trace back and responsibility.